Your booking request cannot be submitted because your Hotelcard will no longer be valid at the time of your stay. Please renew your Hotelcard now. It only takes a few seconds.

Get the free login 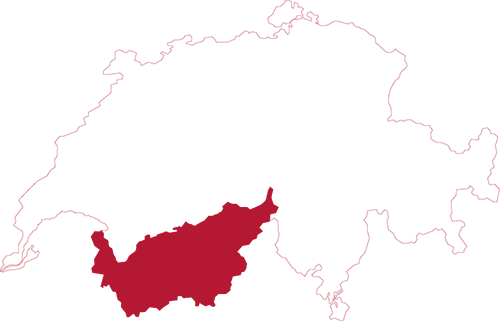 ‘Valais – carved into your heart in stone’ is a slogan which will be familiar to many Swiss people. It sounds a little wild, making it an excellent fit with the region’s rugged, craggy landscape. ‘Rugged’ is also a word used to describe the people who live in these mountains, but they soon warm up and are actually very hospitable.

German-speaking Swiss associate Valais with white wine, fondue and raclette; skiing; hiking and the Matterhorn. In actual fact this bilingual region in southwestern Switzerland has far more to offer than just its famous culinary specialities and classic destinations such as Zermatt or Crans-Montana. Read on to discover some of its less well-known attractions.

Valais – One of Switzerland’s top skiing areas
Valais is not only western Switzerland’s largest skiing region but also the country’s largest. Its main skiing destinations such as Saas-Fee, Crans-Montana, Nendaz, Verbier, Veysonnaz and Thyon (Les 4 Vallées) and Zermatt attract huge numbers of winter sports enthusiasts. Depending on your requirements Valais’ smaller skiing areas can, however, also be worth considering. Beginners or families with small children will, for example, find that areas such as Grächen, Bettmeralp or Saas-Almagell are perfect for their needs.

Warm summers and lots of apricots in Valais
It is hard to imagine that such a majestic winter landscape can also be home to Switzerland’s main cultivation area for apricots. In fact, when winter finally ends Valais is one of the country’s warmest regions. The region’s orchards cover an area of over 700 hectares while it also offers perfect conditions for wine growing, ensuring that, along with Ticino, it is considered one of Switzerland’s sunshine paradises. 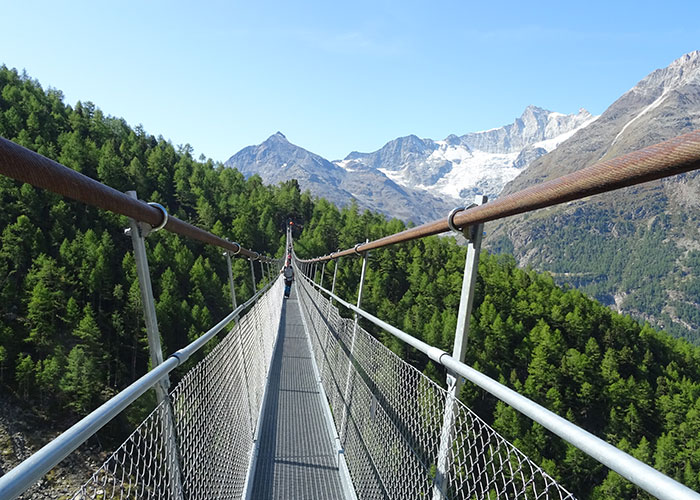 The district of Randa, located in the Matter Valley, is home to a dizzying spectacle – the world’s longest pedestrian suspension bridge, opened in 2017. The Charles Kuonen Suspension Bridge is almost half a kilometre long and traverses a gorge which is 85 metres deep in places. The bridge is sited on the “Europaweg” hiking trail, which links Grächen and Zermatt and takes two days to complete. Walkers can enjoy fantastic views of the Matterhorn all along the route.
Location: Randa
More information

This hike, which is considered an insider tip among walkers, begins at Moosalp Pass, with the starting point served by buses running from the villages of Bürchen and Törbel. The route initially ascends the Telli, crossing an old moraine before it becomes more physically demanding. The hard climb up the ridge is, however, well worth it, as there is a fantastic panoramic view across the Rhone Valley from the top. From there, the trail continues across the ridge to the Augstbordhorn mountain with its 360-degree panoramic view of the Valais Alps, helping you forget the tiring ascent. After admiring the outlook, take the trail back to the Moosalp Pass.
Location: Törbel / Bürchen
More information 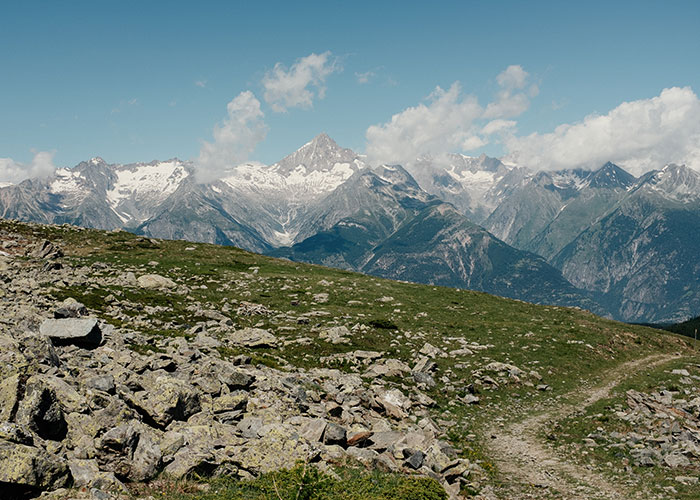 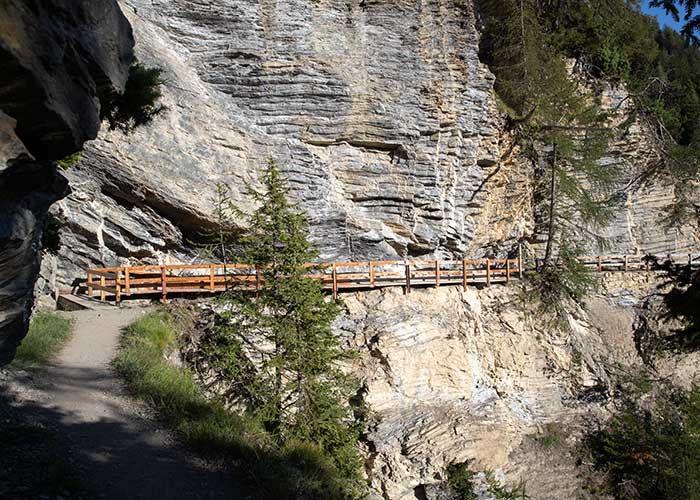 The impressive circular hike along the “Bisse du Ro” waterway

This approximately 16 kilometre hike is not easy, including a total ascent of 1156 metres along its route. It is, however, a must-do for walkers. Although not heavily frequented by tourists the route is considered one of the most beautiful in Switzerland. The circular hike begins in Crans-Montana and takes you to Lake Tseuzier, before returning to the starting point along a different route. The trail, which follows the old “Bisse du Ro” irrigation waterway, carved into the cliffs in the 15th century, is well secured. The best time for this hike is between May and September.
Location: Crans-Montana
More information

Cross-country skiing in the Goms district

One of the most famous, popular and largest cross-country skiing paradises in Switzerland is located in the Obergoms: almost 100 km of trails await winter sports enthusiasts in the north-east of the canton of Valais. The wide high valley is perfect for cross-country skiing. A day ticket costs 16 francs. This includes use of the Matterhorn Gotthard Railway, which provides access to the entire area.
Location: Niederwald, Oberwald
More information

Brig has one of the region’s most attractive ice rinks. It is located in the town square and laid out every year during the Advent season. Skating in Brig is a particularly romantic experience thanks to the Christmas illuminations which highlight the town centre’s pretty houses, giving them a fairy tale atmosphere. 100 % winter magic – for young lovers, families with children and anyone else who loves the festive season.
Location: Brig
More information 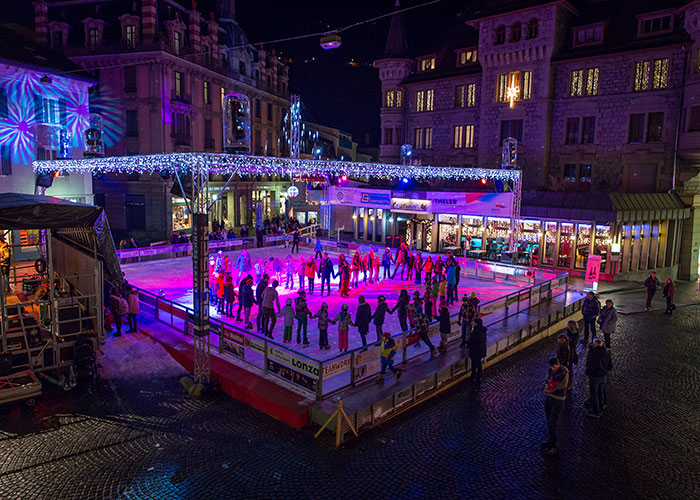 15 metres underneath the glacier in Zermatt

In Zermatt you can not only admire the Matterhorn from the outside but also experience the eternal ice underneath Switzerland’s most famous mountain. A lift takes visitors 15 metres under the glacier’s surface to a magical world of snow and ice. Majestic glittering ice sculptures and tunnels through the snow and ice await you. Forget your everyday worries and cares and allow this fairy tale icy underground palace to whisk you away to another world.
Location: Zermatt
More information


Hot spots in the Valais region 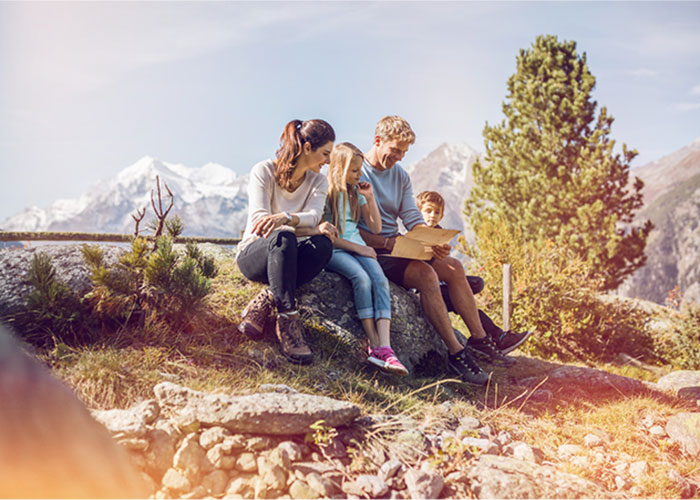 The Valais mountain village of Grächen is a popular holiday destination for families. It is also known for its many hiking trails, with the network of routes in Grächen and St. Niklaus covering a total of 250 km. Children will love the special themed hikes, such as the Prince’s Trail or the Dwarves’ Trail. They can also enjoy the area’s fun parks and treasure hunts. In addition to this, Grächen is a great winter holiday destination for families, with a small skiing area specifically designed for children and adult beginners.
Show all hotels in Grächen

Verbier is a very special winter sports destination. It is international, cosmopolitan and modern but still retains its traditional charm, particularly in the old area, known as Verbier Village, located below the village’s tourist area. Verbier is part of the “4 Vallées” skiing area, which has over 410 km of runs and whose highest point is 3300 metres above sea level. Panoramic views are guaranteed – not only thanks to the altitude but also to the skiing area’s location. Verbier even offers heliskiing for more adventurous skiers! 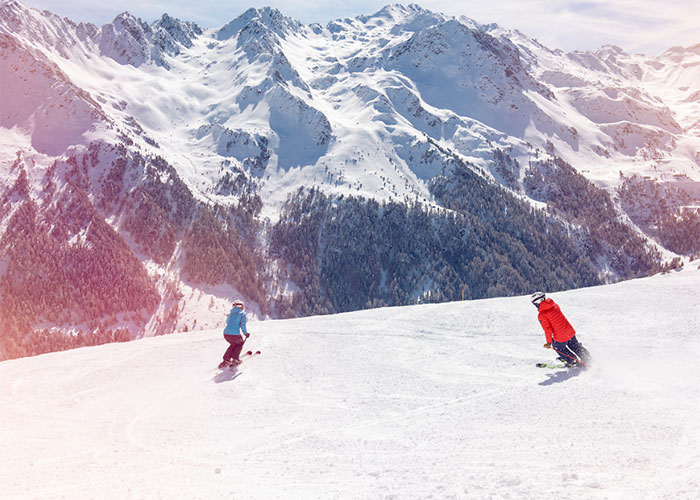 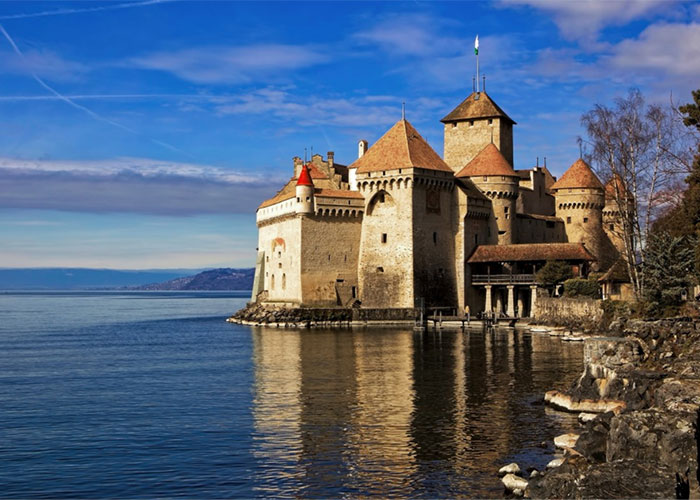 Thanks to its location on Lake Geneva and the protection of the surrounding mountains Montreux enjoys a mild, Mediterranean climate which is very unusual in the otherwise mountainous Valais region. The Montreux Jazz Festival (since 1967) has made the small town world famous, as has the fact that it provided the inspiration for Deep Purple’s hit “Smoke on the Water”. In fact, this pretty little town is almost as well-known as Zurich, the Matterhorn or the Jungfrau. Tips – visit the Freddie Mercury statue (he owned a villa in Montreux) and Chillon Castle.
Show all hotels in Montreux

"The mountains are our favourite destination. Switzerland has so many beautiful places to go and, thanks to Hotelcard, we can explore them at a discount."

"I celebrated my 70th birthday with my husband in a pretty, charming hotel on Lake Constance thanks to the Hotelcard - a dream came true! For retired people like us Hotelcard is great hit." 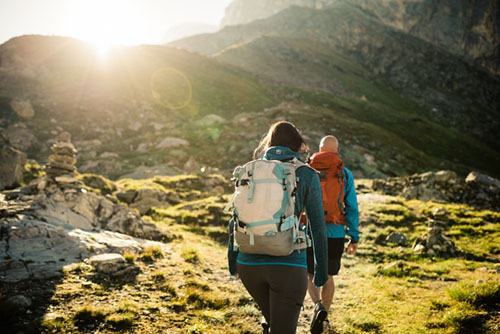 At Hotelcard we want to know all about the great places to visit in Switzerland. Our members contiuously contribute with their stories and experiences. Send us your suggestions too! You can also post your experience on Instagram to #heimatlaune or #hotelcard.

You will get an E-Mail with your account information immediately.